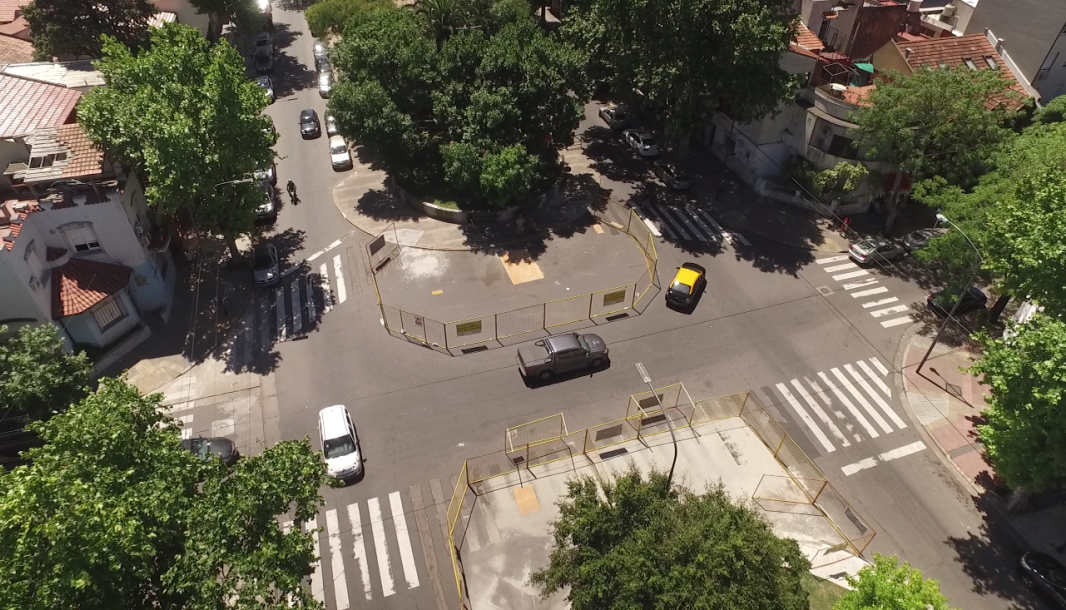 A Buenos Aires, Argentina neighborhood is winning the fight against the primacy of the car, the online daily, Puraciudad announced last week. The cost of victory is not only in pesos, but in parking, as well.

Over the past several years, the city government, working in partnership with the federal government’s Ministry of Urban Development, has been pedestrianizing intersections in the neighborhood, or “barrio”, of Saavedra. The two informed the media that they will redevelop selected intersections of the San Isidro Labrador Avenue in 2017.

The goal will be to provide safer crossings and “give priority to the hierarchization of the avenue with the focus placed on walkability”, the government agencies reported. With this work the residents and visitors will get more than 3 thousand m2 (about 32,292 square feet) of pedestrian space.

This will be achieved by signalizing the intersections, narrowing traffic lanes, removing parking spaces and installing green space and street furniture. San Isidro Avenue already enjoys some green space located between the northbound and southbound lanes; however, much of it is inaccessible due to poor pedestrian access.

A mostly residential community, Saavedra and transportation have a long and difficult history. Avenida General Paz and the Pan American Highway intersect at the barrio’s northern end. In the 1970s, the military government decreed the barrio would be effectively split in two by a planned, limited-access expressway through the heart of Saavedra. This, and the on/off ramps and arterial roads necessary to support the anticipated expressway, would have chopped the barrio into unsustainable mini-neighborhoods.

Saavedra might have become merely a giant shortcut for traversing traffic neither originating nor destinating in the barrio.

Although demolition of the area was completed, the planned expressway was never built. The demolished space was rebuilt as a grand avenue, Avenida Roberto Goyeneche, and commercial space. Goyenche and other roads in the previously quiet neighborhood still became cut-throughs for traffic to and from other nearby neighborhoods.

The barrio retained some local character after these developments; however, average vehicle speeds were dangerously high, congestion increased and there were few safe areas for pedestrians to cross the roadways.

These types of improvements have been implemented in other BA neighborhoods. “With the main objective of improving pedestrian safety, during 2016 we generated pedestrian interventions gaining 5160 m2 (about 55,542 square feet) more of pedestrian space, adding 75 safer crossings in a total of 19 intervened intersections,” the city government said in an official statement.

“In total since 2012, we have been able to recover an area equivalent to the size of a football stadium, that is, 9,792 m2 (about 105,400 square feet) of public space for pedestrians” the Ministry of Urban Development added.

This is an excellent example of a “Road Diet”, as we discuss here. Not everyone is happy, however klicken sie hier, um mehr zu lesen. Some local merchants and residents are concerned about how the reduction of parking spaces will affect the livability of what had become a car-centric neighborhood.

While walkable cities remain a worthy goal, cities also need to anticipate unintended consequences, such as cars cruising for parking spaces that no longer exist. Boosting public transit in such areas, car/bike sharing and encouraging the development of at least some commercial, off-street parking space should be considered as well.

(Want more information? See PuraCiudad’s take on this here. Please check out our forums. If you have comments or suggestions for improvements to our content, please share your experiences with us and other professionals visiting our site. Add your comments below – if Comments are “on” – or by contacting us directly here.)