Confessions of a Thief 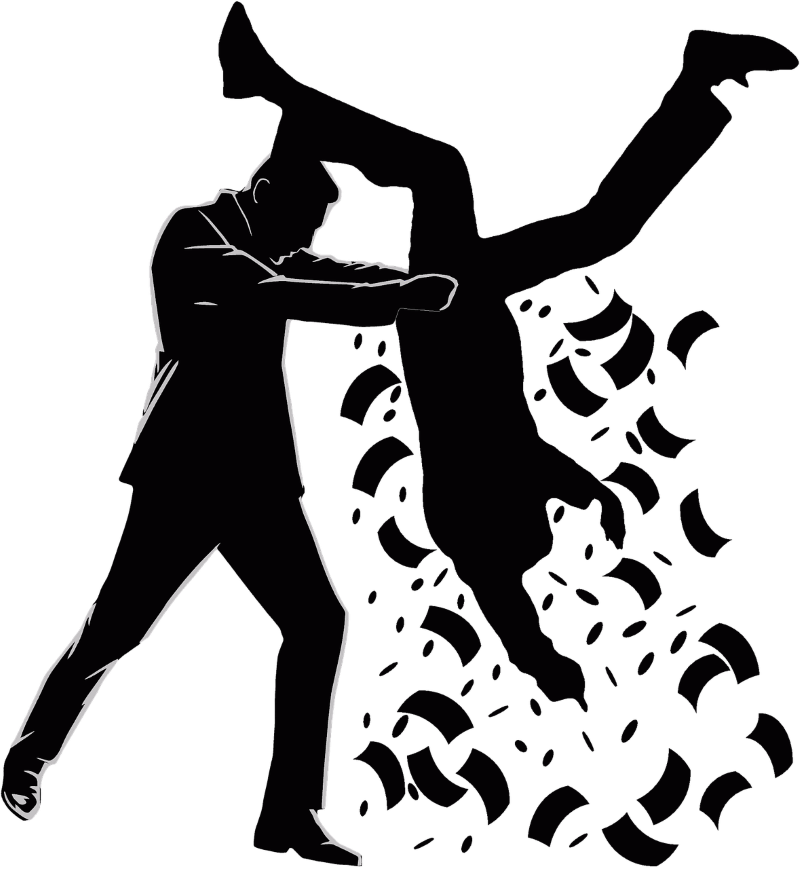 I’m looking for a job and I hope you’ll hire me.

Actually I’ve got a job but I think I’m going to be fired any day now. Eventually, I’ll make a dumb mistake and even an idiot like my boss will catch me. Anyway, I’m going to milk it for as long as possible. When it happens, it happens. I’m not worried. Why? Because people like me can always find a new job, a new “mark”.

Are you that mark? I hope so!

I’m looking for a position where I can handle money. Cash, that is. So a cushy cashier job sitting in a booth somewhere in a parking garage or a toll plaza or the entrance to a car ferry would be just great.

My current boss and I have been business “partners” for months now. Of course, I’m a silent partner. He doesn’t know about our “partnership” yet. But we weren’t always partners, you know.

When I got this job I sort of intended to do it all right and honest this time. I’d had a few scrapes in the workplace before, but I had been thinking about starting over. And I did for a while.

It’s Really All My Boss’s Fault

But my boss brought it all on himself – our partnership, that is. When he finds out about how I’ve been withdrawing my share of the proceeds of our partnership, he’ll probably use a bunch of nasty words like “thief” and “stealing” and get all indignant.

Then he’ll fire me like it was my fault or something. But it’s really all his fault. And it’s not really stealing – not the way I see it – he owes me this money. And I’ll tell you why. . .

My boss owes me the money because I’m a very valuable person to him. For one thing, I never miss work. I never call off sick, like some of the slackers he tolerates here. Of course, I was there faithfully every day before we became partners, but I never got so much as a “Thank you.” Now I can’t miss work. I can’t get sick. I’m really scared he’s going to force me to take vacation. If I miss even one day the revenue will go up and he’ll find out about our partnership.

My boss owes me this money because, luckily for me, he’s always short-handed. He doesn’t plan very far ahead. Runs a lot of overtime. He needs me. But I’m trapped, sort of. I count on the income from our partnership for the “extras” in life. You know, the trips to Vegas, my boat, stuff like that. Still, sometimes I think about how things might have been different if he’d just said, “Thank you.”

My boss owes me this money because I have a lot of talents. Sometimes I work as a cashier, a meter collector, a money counter, a bookkeeper, or even a supervisor. I’m flexible. I’m friendly. Most people would think, like he does, that I’m too nice to be a thief. I count on that now.

Before we became partners, I pitched in whenever and wherever he needed help. I was glad to do it. Really. I wanted to show him what I could do. Like I said, I was starting over. But he didn’t care, because he never recognized me for it.

I mean, I wasn’t looking for “Employee of the Month” or anything. That reminds me, whatever became of that program? I guess the boss just dropped it. The last entry on that plaque was a year and a half ago. Everyone knew it was a joke anyway.

Forced to Work Through My Breaks . . .

My boss owes me this money because I don’t complain much. I should complain. Everyone is always whining to him about one thing or another. You know, they want off work to do this or that. But not me. Before we were partners, I was hoping he would see how my attitude was different than everybody else’s.

I didn’t complain about being forced to work through my break, time after time. At least he could’ve called to say the break would be late. I mean, how hard is that?

Then, he changes my schedule to suit him and doesn’t even tell me about it. So he posts it. Same schedule for several months, then boom! I never look at that schedule. Who looks at schedules? I always work the same days. And he knew about my child care situation. I guess he forgot.

So he writes me up for no call – no show. That was a turning point. I tried to explain, but he wouldn’t listen. I didn’t complain. I swallowed that little indignity and resolved to “get even”. That’s what I’ve been doing ever since.

My Hustle is Unappreciated . . .

My boss owes me this money because I DESERVE more money than the rest of the morons who work here. Their attitude is, “I’m paid to show up; if you want me to do any work, well… that’s extra.” Why does he put up with that? That’s never been my attitude.

He calls us “warm bodies.” He’ll say, “I need to plug a warm body in on the evening shift.” Hey boss, that’s a person, with a heart and feelings. You know what’s ironic? Now I hustle because we’re partners and I have more incentive. One for me, one for him.

And you know what? I generate as much revenue for him after my take, than a lot of those lazy slobs who don’t steal.

My boss owes me this money because he didn’t check my background. He was in such a hurry. During the interview, his phone kept going off and he’s interrupting our interview to look at it. Rude, but my time is his time, he figures.

I make a good impression. I dressed nice for the interview. I spoke politely and answered all their questions. I took my time with the application. Left no holes.

I even read the fancy, glossy organizational brochure in the waiting room before the interview. It had pictures of handsome and beautiful models smiling and pretending to enjoy working in this hellhole. It talked about all the opportunities with the organization.

Yet I sort of believed it. I wanted to believe it. Like I said, I came here to start over, to make it up the ladder legit.

But the boss was in such a hurry. The interview was, like three minutes. I said on the application my previous supervisor and I parted due to “creative differences” (I read that in one of those Hollywood magazines). Guess he just took my word for it. He didn’t even ask me about it.

Actually, my old boss claimed I stole from him and fired me. He could never prove anything, of course. He had nothing beyond his reasonable doubts.

Can we talk here?

Now here’s something funny: there’s a guy in the waiting room with me the day of my interview. Sloppy clothes, unshaven. I swear he reeks of liquor. He gets hired too! Has an attitude from day one. Then a couple of weeks later he gets caught stealing. The stupey is shortchanging customers. They don’t fire him. No one to fill the shift, the boss says. They write him up. He gets caught stealing again.

Rude and stupid is a bad combination. I asked my boss why he ever hired the guy. All the boss says is, “Hey, he fogged the mirror…” I guess I did too. Can’t recall anyone ever checking, though.

My boss owes me this money because he never really told us what he expected from our performance. Our organization has this newsletter. It says stuff like “total quality management” and the “customer is number one.” And “I’m an “empowered associate”.

What does that mean to me? The boss says if the customer doesn’t have the money, call the cops. Or better yet, take something hostage. Like a wristwatch…or firstborn child maybe. So if you actually do that, then the boss is all over you.

There’s a whole lot of “do nots” in our employee handbook, but not a lot of “do’s”.

But nothing’s enforced. Like this girl that works in the office for my boss. Everyone knows he likes her. She’s late every day, but she never gets written up. Buddy of mine shows up late one day. My boss’s boss happens to be on site doing an inspection. Splat! My buddy’s gone. There’s no policies, no procedures, no plan. We just do the best we can do and make up our own rules as we go along.

The boss owes me this money because there’s no follow-up. The equipment is really old and doesn’t work half the time. The equipment guys come out to fix it and a few hours later it locks up again. I’ll bet if they got new stuff it would pay for itself in no time. Of course, I’d probably get caught by it, too. Or, at least I’d have to stop our partnership for a while until I figured out how to beat it. And I would.

And then there’s the auditing. Is anyone checking my shift report? Don’t think so. . .

The first day of our partnership I was steamed about missing my lunch break, so I decided to take a ticket – one ticket – to pay for the lunch my boss owed me. I expected to get caught and maybe fired. But no! A few days later, I was sitting there thinking — I got nothing to do a lot of times but sit and think in that booth and mull stuff over – so I thought, hey, I could make some serious Tubmans here.

You know, I got my own theory on this stealing thing. I remember from high school there was this bell curve thing. My teacher says there’s sort of a universal 80-20 rule, some guy named Pareto. In just about everything you look at there’s 10% on one end, 10% on the other, and 80% in the middle.

Stay with me on this now.

I think 10% of the people will never steal. That’s just the way they were brought up, they’re not going to touch anything that’s not theirs. Then there’s 10% on the other end. Those are the bad eggs, the ones that will always steal just ‘cause it’s there. They’re gonna steal no matter what. No guilt, no remorse. Steal and steal until they’re caught.

It’s about attitude and latitude.

If someone with an attitude has the latitude – watch out! They’re going to steal you blind.

(Image in the public domain here. Want more information? Please check out our forums. If you have comments or suggestions, please share your experiences and ideas with us and other professionals visiting our site. Add your comments below – if Comments are “on” – or by contacting us directly here. This post was adapted from an article previously published in magazine or website format. The author retains all second serial and electronic rights. This work has been updated, edited and is distributed by the H2H2H Foundation with the express permission of the author.)