According to Argentina news agency, Télam and the website Floodlist, over 600 people were forced from their homes after flooding in the provinces of Santa Fe and Buenos Aires, Argentina, on 26 December 2016.

Roads in the area, including “Autopista Rosario”, were virtually impassable after the spring rains as can be seen in this video. One flood related death was recorded. A victim died after his car was swept away by flood water in Ramallo, a city located next to the Río Paraná in Buenos Aires Province. This disaster follows an even worse storm almost exactly one year prior, in December 2015, which left 100,000 persons homeless for over two weeks.

Owners and operators of toll roads and large surface parking lots employing best practice management methodologies know this scenario all too well. Flooding not only causes human misery but also – and less importantly of course – revenue losses. A closed toll road or parking lot generates no revenue in the short term.

However, in addition to revenue losses, these facilities may be severely damaged as water undermines the pavement structure. Repairs to paving AND substructure requires significant time (read: road/lane/lot closures, customer inconvenience, more lost revenue) and major expense to restore. Many organizations don’t budget for these calamities.

There are two lessons that these events teach us. First, is the need for expertise in the planning and development of new roads. Drainage is a major consideration for any pavement, especially in low-lying areas. Designers and builders often build to an “80-85 percent” flood scenario, which saves time and money, but may leave the roadways exposed to severe flooding events. A question owners and operators may ask of a new design is, “Is this designed against an average rainy season or against something more significant, like a 100 year average?”

In the case of Autopista Rosario, two catastrophic rain events so close together might suggest a budget tweak or two are in order.

You can’t afford to build a road to handle once-in-a-hundred year events. Certainly, the public would not pay the radically-higher fees required to amortize that type of debt. But in a region where such extreme events are in fact, common, they must be factored into the calculation. If not, then the maintenance reserves must grow exponentially to meet the eventual crisis.

Another important lesson is the critical role routine maintenance plays in limiting flood damage. You may have sufficient drainage to accommodate an extreme event, but if silt has clogged the drainways or plants have taken root in drain collectors, your draina are not operating at capacity. Ignored long enough, even a simple summer thunderstorm becomes an “event”.

A good example of proactive management is concessionaire Autopista Fernão Dias, the company that manages Brazil’s BR-381 between São Paulo and Belo Horizonte. The company recently announced through public relations organizations, news outlets (such as Jornal de Lavras), and social media that they would be performing routine maintenance on a stretch of that toll road. This was to include milling, repaving and repainting the roadway. 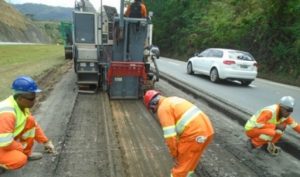 But to our point here, the work also included mowing, brush clearing, cleaning of the drainways and selectively increasing the storm drainage capacity in certain areas of the road.

While this might seem quite routine, those in search of best practices should note that Autopista Fernão Dias:

* Budgeted and scheduled the work well in advance;

* Gave advance notice to the public about the work;

* Made some specific suggestions to the public on how best to avoid potential safety problems and inconvenience;

* Ensured that maximum design drainage would be functional by mowing, cleaning and weeding.

All routine yes, but for that one victim being swept away from your road or lot, it’s anything but routine.