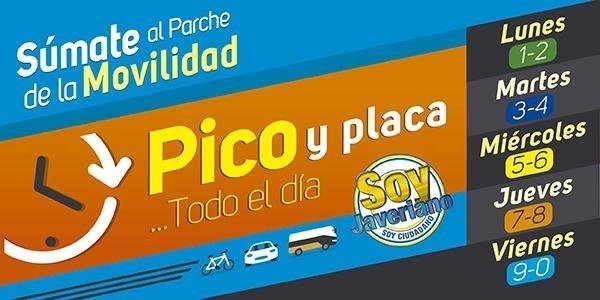 The initiative is the result of numerous consultations between university officials, students and local government officials, City Parking says. Concern has been growing for years over the ongoing traffic congestion south of the the Jesuit school’s campus in Cali, as the city is informally known.

Pico y Placa, or “PyP,” as it is sometimes called across Latin America, is a license plate-based system that restricts vehicles from driving in a restricted area during peak traffic times. The programs typically associate the last number in the plate with a particular day, days or hours when that number is restricted.

Other programs limit vehicles by the color of the license plate or bumper stickers issued in the vehicle registration process. Violators are subject to citation and fines ranging up to the equivalent of one month’s average salary within the jurisdiction.

Note the above image that describes how Javeriana’s new program is configured.

According to the InterAmerican Development Bank’s “Practical Guidebook: Parking and Travel Demand Management Policies in Latin America,” PyP was initially deployed by urban areas such as Mexico City to reduce pollution. Later, it was adopted by other cities to reduce congestion. This was, the IADB notes, “. . . despite the fact that shortly after the first implementation in 1986 in Santiago [Chile], it became clear that this measure had several adverse effects.”

Bogotá began its experiment with PyP in 1998 to alleviate severe traffic congestion. Colombia’s capital city hoped PyP would relieve congestion. The metropolis is built in a very narrow, north-south valley with only a few main thoroughfares connecting the two ends of the city. Dispersing the demand in these traffic chokepoints is the target of PyP programs like Bogotá’s.

Other cities, including Mexico City, Medellin, Colombia, São Paulo, Brazil and Quito, Ecuador have instituted similar efforts. Pico y Placa seeks to redistribute a percentage of the traffic demand into off hours. It also is designed to encourage travelers in peak times to seek other modes of transport, such as public transit, carpooling or biking.

Critics note that “PyP,” is not a solution but a government mandate that inhibits commerce and freedom of movement. PyP also creates hardships for ordinary citizens with limited alternative transportation options, they say.

Indeed, the program has been implemented where the public transit system is underfunded and unable to meet demand displaced by driving restrictions such as PyP. Some PyP cities have only a patchwork of private buses that fulfill that role.

• Distortion of the bi-modal travel behavior curve from one rush hour in the morning and another in the afternoon to one long rush hour during the day (or two longer rush hours).

• Increased car use on Saturdays due to greater availability of vehicles and avoidance of the Monday-Friday restrictions.”

PyP Should Only be a Means to an End

“I don’t like Pico y Placa,” says Carlosfelipe Pardo, Executive Director of the Bogotá-based NGO, Despacio, which advocates for improvements in urban transportation, climate change mitigation and quality of life. “I think it’s an acceptable solution for a short term until the local government finds better alternatives to manage demand such as adequate pricing for the use of roads and parking. But it should never be used as a final solution. This is because motorization increases and Pico y Placa is a solution that acts upon a fixed percentage of the vehicle population and not a fixed amount of vehicles. This means that the overall increase in motorization over time will eventually increase the total number of vehicles using the roads.”

Anecdotal evidence suggests PyP does yield some reductions in pollution and congestion. Detailed studies have yet to be performed to assess the effectiveness of PyP. Until this is known, it appears PyP can be an effective tool, but its benefits appear temporary unless coupled with other TDM strategies.

(Want more information? Visit City Parking at www.city-parking.com; Javeriana University at http://www.javerianacali.edu.co; and, see IADB’s parking guidebook here. Learn more about Despacio and see their publications (some are only available in Spanish) at www.Despacio.org.)