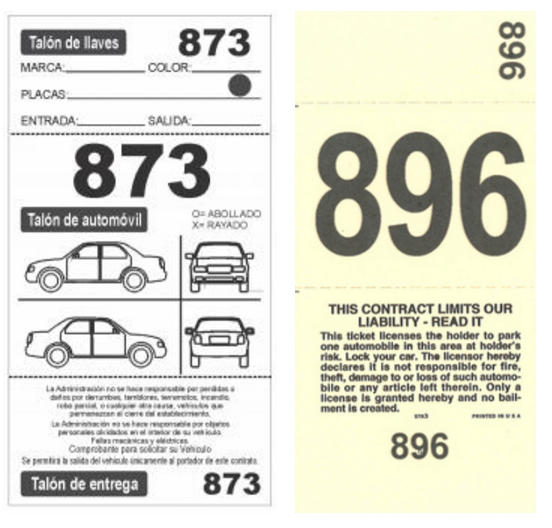 “Stacks” are still a common expression of the art of parking, seen in countless cities throughout the world. Stacks – also known as “stacked parking”, “assisted parking”, “attendant park”, “semi-valet”, among others – has been with us as long as the three-part ticket.

The three-part ticket is the primary mode of service, control and audit over stacks. Each ticket is uniquely numbered and each portion of the ticket is labeled with that number. Each portion serves a unique purpose.

Parking lore has it that Andrew Pansini, a seminal figure in the industry in the city of Los Angeles (US), created the first three-part ticket (TPT) in the early 1920s. It worked so well with stacks then, we still use it today.

The TPT solved several problems for Pansini then . . . and for operators today, such as:

Many cars look alike. This was especially true in the 1920s when most cars were black and the Model T Ford dominated the car market. So the ticket helped distinguish one car from another. License plate information is an easy way to do this today; however, license plates were new and in the early 1920s. They were only first required in Europe in the early 1900s and were not customary in the U.S. until the late 1910s.

Additional data recorded on a TPT about a customer vehicle – then and now – might include color, body style and whether any pre-existing damage was seen by the attendant. When the TPT is issued, one part of the ticket goes to the customer; this serves as the patron’s proof of delivery of the vehicle to the stack. But the customer’s “receipt stub” is also a means to make sure the keys to the very same car model is returned to the customer. We wouldn’t want the customer leaving his rusty bucket of bolts on the lot and driving off in a newer, less-damaged look-alike.

One part of the ticket, often called the “locator”, usually remains in a box in the attendant’s kiosk. It may also be attached to the keys and hung on a wall with numbered hooks corresponding to each space on the lot.

(Not to confuse things, but some larger stack operations utilize a four-part ticket with the locator remaining in a file “locator” box while the fourth ticket portion is attached to the keys and hung on the locator hook. Not to confuse things even further, but some even larger stack operations utilize a five-part ticket; this fifth portion goes to a cashier who serves as an audit checkpoint on the attendants.)

This system enables an attendant to quickly locate a customer’s car on the lot when presented with the customer’s receipt stub. If the car is moved after the customer has been issued the receipt stub, the attendant updates the locator portion and/or rehangs the keys on the space that corresponds to the car’s new location on the lot.

3. Linking the car to a transaction

When a patron enters the lot, an attendant will typically use a time clock to stamp the “in” time of the transaction on each ticket portion. Some locations scrimp on expense by foregoing the time clock, allowing the attendant to write the time by hand.

For parking facilities that charge by a time schedule, omitting a time clock should be considered bad practice. Errors – deliberate for theft or accidental through carelessness – will generate mischarges (charging the customer too much or too little). It will also create a false image of the flow of the business (when customers arrive and depart are a key to pricing schemes and employee scheduling). Whatever money is saved in expense by not buying a time clock will be eaten up many times over in these “errors”.

Some parking facilities utilize a single charge for entry or exit. A time stamp is preferable here, but it is not as critical. The ticket must still be marked up with the customer and car information so it cannot be reused for another transaction.

TPTs usually also contain legal disclaimer language appropriate to the laws of the locality in which it is issued. This language typically attempts to protect the parking operator from legal liability by limiting or disclaiming responsibility for loss or damage to the customer’s vehicle. Such verbiage may also provide warnings about other conditions such as closing hours or safety issues.

Please keep in mind, we are generalizing about procedures here. Parking, like politics, is local. Individual operations vary these procedures to accommodate unique local requirements. As they say in the car commercials on television, your mileage will vary.