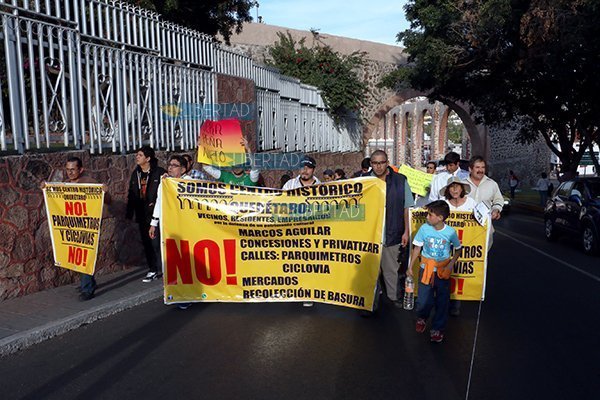 The government secretary of the Municipality of Querétaro, Manuel Velázquez Pegueros recently issued a public warning that anyone who interferes with the completion of a public work can be punished with prison. The “public work” he referred to is the ongoing installation of parking meters in the central Mexican highland city.

“Not for nothing is it an unlawful act that is sanctioned by the penal code,” Pegueros said. “If it happens, it is a crime. Anyone who prevents the completion of a work, we are talking about up to six years in prison,” he said.

The stern warning was made necessary by the recent interference in the installation of parking meters along Ezequiel Montes Avenue in the capital city of the state of Querétaro in central Mexico by a band of protestors.

According to witnesses, a group of about seven persons gathered and began demonstrating against the meters. They next approached workers involved in the project and began to ask questions about why the meters were being installed and how long they would take to complete.

The workers spoke with the group, which persisted in their aggressive questioning. The laborers stopped work and explained they knew little about the overall project and referred them to the government. Pegueros said the demonstration did not directly obstruct or delay the work but that such protests could go no further.

Pegueros said that these protestors are part of the same group that on several occasions have expressed their rejection of the installation of parking meters. He said that he planned to meet with this specific group of people to explain the scope of the work, after several said they believed that the project would disrupt the neighborhood for more than the nine months anticipated.

“We will meet with them, as we are doing with each and every one of the people who live in that street, like those who have a business on the street and in the market,” he said. “The municipal government is respectful of citizen demonstrations, but it will also demand respect for the law.”

He said the government understood that not all citizens will agree to a proposed public work, nevertheless “. . . this is an action that the citizens themselves asked,” Pegueros said. “Over 400 merchants in the area support the project.”

Pegueros said meetings are being held with citizens and merchants almost daily, “. . . where we are explaining to them what the works consist of and the time that they will take. This includes the tenants of the La Calzada market, merchants and residents of the most affected avenue, so that they know the stages of the project.”

According to Pegueros, these protestors are not even from the affected neighborhood and just oppose paid street parking on principle. They have taken to social media to rally opposition to the meters. “This is not really a new occurrence. It is opposition from many years ago that continues,” said Pegueros. “Those who are not informed, can easily know the scope of the work to be developed in Ezequiel Montes.”

(Want more information? Check here and here (in Spanish only). Please check out our forums. If you have comments or suggestions, please share your experiences and ideas with us and other professionals visiting our site. Add your comments below – if Comments are “on” – or by contacting us directly here.)