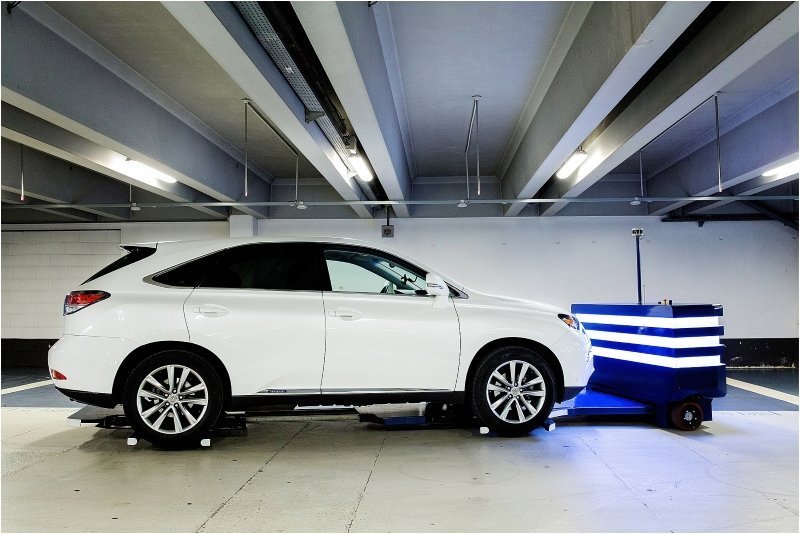 Ancient Greek proverb: “There’s many a slip ‘twixt the cup and the lip.”

There is some “wow” to this story. Just Google it. Pages and pages of stories fawning over what appears to be a splashy, new advance in automated parking.

According to the automated valet’s creator, Stanley Robotics, customers first solicit a reservation to utilize the service via a mobile app. Travelers also indicate in the reservation system the time and date of their return.

This critical piece of data allows the artificial intelligence behind the system to stage vehicles in the order in which they will need to be returned to the customer. Consequently, adjustments to this staging can apparently be made on the fly as the AI interfaces with the airport’s arrival/departure board.

Some interesting visuals of the customer experience can be seen on the designer of the reception areas for Stan, Romeric Le Tiec Studio. Upon arrival customers enter drop-off portals, receives their ticket, take their car keys and leave. The look is chic, sleek and modern.

Behind the scenes, “Stan” the Robot Valet then takes over. Actually there is a swarm of Stans, whose actions are coordinated by the AI. Stan(s) lift, move and stack patron cars. Stan later retrieves customer vehicles according to reservation data. Customers can also override the system to adjust the pickup time according to individual scheduling requirements.

So far, experienced parking professionals will recognize this process as nearly identical to the other automated parking systems that have been in use for over 30 years in a variety of developments, particularly urban luxury residential buildings.

Nash has been in the automatic parking business for nearly a decade. Gotham represents industry luminaries 5BY2 and American AutoPark. The firm also consults with municipalities and real estate developers on planning, designing and implementing of successful automated robotic and mechanical parking systems.

“However, some developers have learned the hard way that installing these systems is fraught with significant financial risk unless they choose an experienced supplier to engineer, install, and maintain their system,” Nash says.

All the low-hanging fruit offered by state-of-the-art, automated parking benefits are ripe for the taking with Stan. These include lower operating costs via reduction of staffing, improved revenue control via electronic payments and the increase in stall capacity, as automated parking does not require traditional drive lanes.

But here’s what gives Stan some “wow” factor: The system is operating in an as-built garage. There are no fixed trackways. Only a few minor modifications in the reception area of the garage appear to have been made. Prior to Stan, nearly all automated garages operated in either purpose-built structures or in facilities that have been significantly remodeled.

The tantalizing potential of this concept is that by retrofitting an existing self-park facility at a relatively low cost, you can still achieve many of the benefits promised by automated parking. Instead of an interlocking pallet system, the pallets are free to range over an entire parking area.

In an airport facility, where the length of stay is measure in days, not hours, Stan has plenty of time to retrieve that vehicle in the back of the stack.

Certainly, Stan has created a stir in the media echo chamber. However, Nash recommends caution with systems that make a big splash.

“I only became aware of Stanley when this recent press release created a lot of buzz,” he says. “This reminds me of Serva, which launched with similar fanfare in 2014, but I have not seen them anywhere in the U auf diese website zu gelangen.S. marketplace since then.”

“They [Stanley] certainly have great marketing,” Nash observes. “But I’ve seen more than one disastrous and costly project failures as a result of a developer being impressed by great marketing.”

A tidbit to consider: While H2’s research was not exhaustive, we did not see any video of Stan muscling a car up a ramp in a multi-level structure. This might suggest that Stan is best suited – at this time – for a flat floor on the first level of a structure, where much of the video is shown.

Also noted, all vehicles moved were small- to mid-size passenger cars. It’s not yet apparent if Stan can relocate full-size cars and trucks.

But what about on an open lot? “One thing I noted with concern was their claim that this works as an outdoor valet parking alternative,” says Nash. “One has to wonder how they will cope with the heavy snowfall here in the Northeast.”

To mobility management professionals considering automated parking solutions, Nash says, “The only way to judge the viability of any particular solution is to analyze data on speed, reliability and lifecycle costs across multiple projects that have been operating for multiple years in a variety of climates and uses.”

“I recommend a ’10-10 Test’ for screening automated parking vendors,” Nash continues. “That means developers should only consider solutions that have at least 10 projects built with the exact same technology they are considering buying, and that the oldest one of those 10 projects having been in use for at least 10 years.”

“That may be too conservative for some people,” says Nash. “They may choose a ‘5-5 Test’ meaning 5 systems operating for at least 5 years, but anything less is inviting a financial catastrophe.”

Nash also cautions that a successful track record with other related automated systems – even if they are for parking cars – should not give developers comfort. The interaction between the software and hardware is complex, and since the mechanisms and structure are carrying heavy loads, the actual durability, and hence lifecycle cost of these systems can only be determined after years of real world use.

As the ancient Greek proverb noted at the start of this article implies, just when it seems there is nothing that can go wrong, watch out. Stan may indeed prove to be revolutionary.

(Want more information? Contact Woody Nash at woody@gothamparking.com. Please check out our forums. If you have comments or suggestions, please share your experiences and ideas with us and other professionals visiting our site. Add your comments below – if Comments are “on” – or by contacting us directly here.)