Taking Parking Out of the Pigeonhole 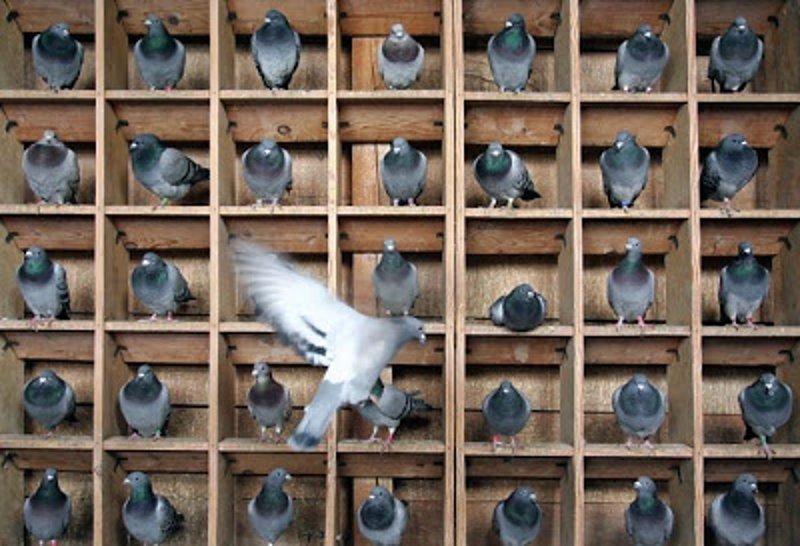 For a thousand years, the fastest and most reliable way to send a message was via “homing” pigeons. These birds possess a not yet fully understood geomagnetic capability to remember where their “home” was located. Homing pigeons were kept in complexes of petite boxes until it was time to strap a message to their leg and let them loose to return home. These complexes became known as “pigeonholes”.

Technologies such as the telegraph and radio made homing pigeons obsolete by the early 20th century. However, our forebears repurposed those now-useless pigeonholes – hopefully, cleaning them well first – into storage for a variety of uses, including postal letters, machine parts and even transacted parking tickets.

The pigeons? They appear to have settled comfortably into the nooks and crannies of parking garages.

How the Pigeonhole Works

Before the widespread deployment of the automatic parking fee computer, the typical parking cashier “pigeonholed” their tickets. Since the pigeonhole was a small shelf with multiple compartments, each opening could be designated for a price category; e.g., $1, $2, $20, etc.

Thus, as a cashier collected tickets from customers, each ticket was filed in the appropriate price bin. At the end of the shift, the cashier counted the tickets in each bin and recapped the numbers on a manual shift report. The shift report and tickets, bundled by price category, would then be submitted to a supervisor.

Pigeonholing was a terrific solution . . . for its time.

With the advent of the centralized Parking Access and Revenue Control System (PARCS) in high-volume facilities like airports, the days of the pigeonhole have long since passed. (Note: that the pigeonhole system is still deployed sensibly around the world in non-automated locations that are ungated or too small to justify a full-blown PARCS.)

Yet the pigeonholing habit, like real pigeons roosting in a garage, appears to be difficult to dismiss. Observers will note the pigeonhole – or some filing system variation of it – is still in use in a number of larger facilities, including some larger airports and medical facilities, which long ago converted to a state-of-the-art PARCS.

Peek inside any cashier booth today; you’ll be surprised at how many 21st century operations are still stacking or pigeonholing tickets a la 1950.

Why Do Many Parking People Still Love Their Pigeonholes?

There are a number of possible explanations as to why pigeonholes linger on past their shelf life of usefulness. Certainly, there is “tradition”; teaching a cashier accustomed to pigeonholing to use a fee computer is tough enough. Teaching parking auditors a new way to audit using a PC or “app” rather than a 10-key calculator is perhaps even tougher.

For many folks, the plaintive cry of “but we’ve always done it that way” is preferable to the optimistic, Monty Python-esque pronouncement, “and now for something completely different”.

Sometimes We Compromise with New Technology

Then there is the idea of “technology compromise”: in adapting new technologies, there is a tendency to compromise with the dramatic change wrought by adoption of a new system by maintaining – consciously or not – some aspects of the old.

Some of us, for example, still print out documents we read on a computer screen and then “file” it in our old-timey manila folder. Our angst about the new is relieved by our comfort with the old. The cruel blows of change are softened by something familiar from the past.

Ultimately, however, we must consider that some of this is simply a failure to embrace change.

Automation Should Simplify, Not Complicate

Changing technology in any one part of a system should prompt a review of how the new technology impacts other system functions. The goal, after all, is to accomplish the mission as efficiently as possible; automation is supposed to simplify, not complicate.

However, independent outside auditors often report examples of parking managers requiring reports in a certain format they are accustomed to, even if the report must be manually constructed by staff and is readily available, albeit in slightly different form, automatically and electronically.

To be clear about how this works, someone takes the output from a device or central computer, recalculates the data so that it will fit on the old form, manually completes the form with the recombobulated data and submits it to the manager. Four steps where two will do.

So what’s wrong with pigeonholing? What’s the big deal about the way tickets are filed? Aren’t we all going ticketless anyway?

With enhancements such as license plate recognition (LPR) that link the actual vehicle to the entrance and exit transactions, the ticket becomes almost irrelevant. In many major facilities, particularly airports, 99% of all tickets might be processed automatically at the full, “face” parking rate. A cashier only intervenes in the event of system failure or for a transaction that does not fit into the computer’s automatic programming.

Outside of presenting a human face for customer service purposes, the cashier in these systems functions primarily as a transaction facilitator and a living, breathing change machine.

For the auditor faced with stacks and stacks of tickets there is simply no point to counting or auditing these automatically transacted tickets and matching them against what a cashier “says” is there. The computer tells us what’s there . . . or at least, what’s supposed to be there.

Remember, the primary purpose of auditing is to prevent human fraud, not machine malfeasance. Tickets processed automatically are already “pigeonholed” virtually by electronic means. Manually counting them simply repeats the computer’s work. (We’ll assume, of course, that the computer is accurately programmed and is checked periodically just for that.)

Look for the Exceptions

Therefore, the only tickets the auditor should be interested in are those exceptions, the ones that were not processed automatically. These would include manual validations, discounts, or other accommodations made for service purposes, such as tow trucks.

Any transaction in which the cashier overrode the automatic capabilities of the system and imposed his/her own will should be a candidate for inspection.

Now how to find it? In a large operation, the search for a single ticket, even if the transaction were numbered, could take hours with tickets scattered across pigeonholes. But since the majority of modern PARCS assign sequential transaction numbers, if the tickets are stored in “transaction ring order”, that is, in the order they were processed, finding a single ticket is a breeze.

Unless the cashier has “misplaced” it, of course.

Experienced independent outside auditors will tell you when they see an PARCS-driven operation that is still pigeonholing large volumes of tickets, there are likely to be problems: lack of auditing, tickets misfiled, thrown away, or substituted.

After all, a dishonest cashier, like the auditor, knows how difficult it is to find a single ticket.

(Want more information? Please check out our forums. If you have comments or suggestions, please share your experiences and ideas with us and other professionals visiting our site. Add your comments below – if Comments are “on” – or by contacting us directly here. This post was adapted from an article previously published in magazine or website format. The author retains all second serial and electronic rights. This work has been updated, edited and is distributed by the H2H2H Foundation with the express permission of the author. Image above is apparently in the public domain, first appearing at pigeonhole.usegrid.net/ in 2012.) klicken sie hier, um mehr zu lesen