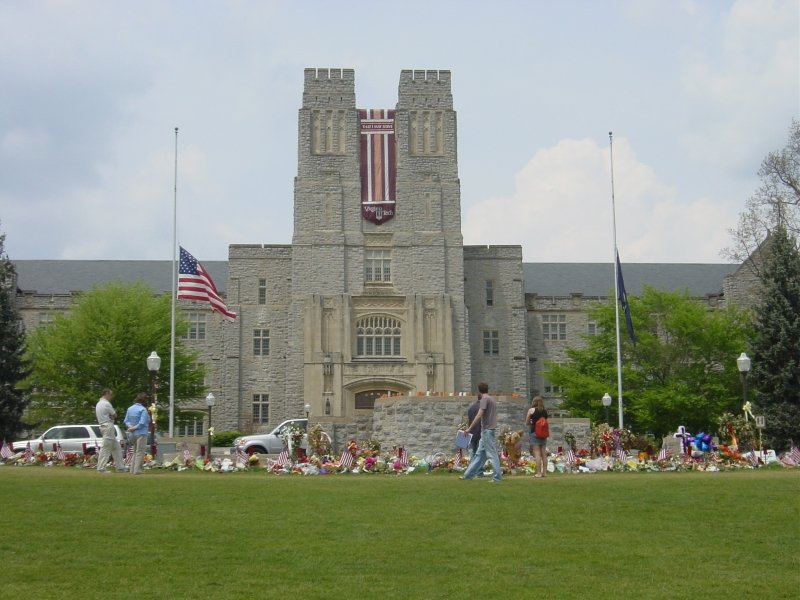 (Image courtesy of the H2H2H Foundation, taken in May 2007. A spontaneous memorial was created in front of Burruss Hall on the Virginia Tech campus following the April 16, 2007 shootings that killed, wounded or injured 45 persons. A permanent memorial now resides in this same spot.)

DATELINE: MAY 10, 2007, BLACKSBURG, VIRGINIA (US) – On a recent sunny, wind-swept May morning, the Virginia Tech campus quietly hummed with life.

Students attended their final week of class before exams. Parents loaded their children’s belongings. Dozens of visitors milled around the drill field, contemplating solemn memorials to the victims of April 16, just steps from where so many lives ended.

None of the students, parents, or visitors are in danger of being ticketed or towed for misparking. No tickets have been written since April 16 and none are likely to be until after graduation. “It’s just not a priority,” says Steve Mouras, director of Tech’s Office of Transportation & Records Management.

On this campus still reeling from the largest mass murder in the history of the country [since surpassed only by the Orlando nightclub shootings in 2016], the lessons learned from the events of the last few weeks are only now beginning to sink in.

Richard McCoy, the manager of Tech’s Parking Services for the past eleven years [McCoy retired in 2016], was just arriving at work when the first two killings occurred.

Concerned for the safety of his staff, McCoy immediately pulled his officers off the streets. As the “normal” daily routines began, the second wave of shootings was reported. “Everyone had the police channel on,” McCoy remembered. “In all the police traffic coming across the radio, you could hear the gunshots.”

McCoy dismissed all but his essential personnel, as hundreds of law enforcement and emergency personnel swarmed the campus. They listened helplessly as the terrible news dribbled in.

Late Tuesday night the toll became personal: one of their own was among the dead. (See adjacent article on Jarrett Lee Lane of Virginia Tech’s Office of Transportation and Parking Services.)

Mouras was attending a conference in Philadelphia when he heard the news. In constant contact with McCoy, he hopped the first flight back and arrived that afternoon in nearby Roanoke. He was stunned to see the normally quiet airport filled to capacity with what Mouras called the “tragedy industry”.

“Don’t kid yourself, its not just the media,” Mouras says. “There are an awful lot of other people who have gear packed in boxes, vehicles designated, and teams assigned. When there is a tragedy…they are on the road.”

Soon organizations such as the Red Cross and Salvation Army had set up shop on the drill field. “They’re just here to help,” says Mouras. “But after a while, kind of weighing it all out, when does the helping become a problem and how do we deal with all that?”

With Norris Hall a grisly crime scene, over 100 satellite trucks, 300 media outlets, and probably twice that in related vehicles began to randomly assemble in different locations. It was what one media type informed Mouras the “biggest media event of all time – bigger than Colombine, bigger than OJ.”

Simultaneously, hundreds of parents descended onto campus to retrieve their children or search for those who hadn’t been heard from. Visitors, some empathetic, some just curious, began to swarm the area.

Tech had an emergency response plan, but by Tuesday morning, McCoy noted wryly, “I could have thrown it out the window and been as well served by it as I could be by just shooting from the hip.”

The media handlers, University Relations, were also improvising. There were no pre-planned lines of communication between them and the Office of Transportation and Parking Services.

From Enforcers to Enablers

“This place was out of control…we had gridlock on campus,” recalls Mouras. “The challenge is what do we do? Do we just tow the family member of someone who was deceased? Do we tow the VIP who …couldn’t find a parking spot?”

Sheer volume and the inability to identify their customers led to the decision not to do any enforcement. What they would attempt to do was manage what they could, which, in the words of Mouras, “…frankly, was not much for the first 72 hours.”

The team decided to manage upwards from individual spaces, lots, and roadways to service priority groups, beginning with law enforcement and emergency services. They needed to figure out who absolutely had to have parking and where they needed it.

With police unreachable by phone, email “dysfunctional”, in Mouras’s words, cellphone service clogged, and no working emergency plan in place, the department became proactive, rather than await instructions from an overburdened leadership.

Liaisons were dispatched to the swamped University Relations group and local Blacksburg Transit, which Tech co-manages and comprises 96% of the ridership. Every available body was put on the street to help keep traffic moving.

McCoy notes that although the parking office remained open, in retrospect, he would have pulled those individuals as well. “Everybody should be cross-trained,” he says. He suggests there be a clear understanding that in a disaster there is no turf.

The President and a Catharsis at the Convocation

There would be no progress on Tuesday, with planning for the memorial convocation and the arrival of President George W. Bush. “When the president shows up that’s the only game in town,” says Mouras. “Unless you have vast resources, it will suck you in and that’s the only thing you do.”

With additional assistance from extra law enforcement personnel and the Virginia Department of Emergency Management, McCoy slowly began funneling the media and visitor traffic to specific areas. If Wednesday the rules were made, by Thursday they were being enforced. Friday, campus was back under control.

Meanwhile, grief counselors worked with the department’s managers to help them recognize signs of distress in their employees and counseling was then made available to all faculty, staff, and students. “We’ve all cried,” says Mouras. “But there was, and is, much work remaining.”

Healing in the Hokie Nation

With little time to do much more than react, McCoy knows there are lessons to learn from this experience. “Over the next several months we will have to start putting together some things, specifically how to fix the issues we faced”, he says.

McCoy recalls, that for him and his department, recovery began when Monday morning classes resumed. Students were not required to return if they accepted their existing grades. He looked out over a filling parking lot and for the first time he could remember, he was happy to see so many cars.

Eighty percent of Tech’s students returned for the end of school to make the oft-quoted statement from the memorial convocation that the Hokies “will prevail”.

For the Virginia Tech Department of Transportation and Parking Services, the moment embodied the institution’s motto: “Ut Prosim” (“That I May Serve”).